This pomegranate molasses based beet recipe is inspired by the flavors of Iran. A country whose food has greatly influenced my ancestral cuisine. I became obsessed Iranian food at the age of nineteen when I met Mojedeh.  A sweet, fun and feisty Iranian woman in her mid-thirties, who transitioned from co-worker to friend during my file clerk days. Mojedeh who went by the name Sheri would invite me for dinner practically every day after she completed billing and I completed filing for the two psychiatrists who provided our bi-weekly paychecks.

It was a part-time college gig for me, where the reward of watching Sheri’s prepare Persian food for her family was the cherry on the cake.  Learning to make tadhiq, celery stew and prepare saffron the Persian way nourished my curious nature.  As back in those days, the Food Network barely existed, Youtube was non-existent and the way to learn how to cook foods from other cultures was through personal connections. I enjoyed many a dish not found on restaurant menus. Dishes I knew from my own experience as an immigrant who never saw her favorite comfort foods at Indian/Pakistani restaurants like kitchari, khadi (a kathiwari yogurt curry), and masoor rice, only existed at home.

It’s been more than two decades since my dinners at Sherri’s home, but the memories do not fade easily. Each time I see my pantry staples of pomegranate molasses, kashk (whey), zeresk (barberries), and sumac, I am grateful for her generosity and hospitality. For expanding my pantry with ingredients I would see at our local Afghani/Iranian market, but had no idea how to use. Now, they are on the grocery list and as important to nourishing me as daal and rice.

Of the many stews I learned from Sheri, feseenjoon a rich burgundy colored stew of ground walnuts and pomegranate molasses is near and dear to my heart. On my yearly winter/spring menu, this tart-sweet stew inspired this recipe. I made it for the first time this past Thanksgiving and since then it’s been on regular rotation. Nurturing the sweet taste all our taste buds need. On Thanksgiving, it was served as a side to compliment a lovely vegetable tagine. Since then I have been tossing the warm pomegranate molasses glazed beets with arugula for a scrumptious beet salad. Happy Eating. Happy Digesting.

Pomegranate or anar as it is called in Hindi, Urdu, and Farsi is revered by many ancient cultures and religions, from Judaism to Islam. As the saying goes in the Indian sub-continent “ek anar sew bimar!” meaning one pomegranate will cure one hundred illnesses. The essence behind the medicine of this antioxidant-rich fruit is its ability to cleanse & support the lymphatic system.

Pomegranates purify the clear part of the plasma, the rasa dhata. The first of the seven tissues that build all other tissues according to Ayurveda. When rasa dhatu is ama-free or toxins-free, it is richer in prana, the life force that will build the remaining six tissues—blood, muscle, fat, bone, marrow, and the reproductive tissue. When these tissues are healthy, our immune system is stronger, and we are able to form ojas, the subtle energy of kapha dosha that enhances the quality of our life on a physical, emotional and mental level.

Mother Nature brings us ruby-red pomegranates in-between summer and winter to help alkalize the body, the sour taste boosts digestion, the astringent taste tones, the sweet taste nourishes, and the slightly bitter cleanses. Rich in vitamin c, b5, and potassium are the vitamins and minerals that also support vata dosha, the most commonly imbalanced dosha in the world we live in today and the one that also “governs” the fall season. Mother Nature, she always blesses us with what we holistically need every season! 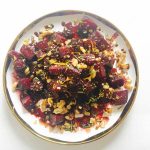 in the roasting pan